My first Monopoly-inspired works were made directly on the game boards. I quickly realized that each country had its own version, which led me to work on national flags. 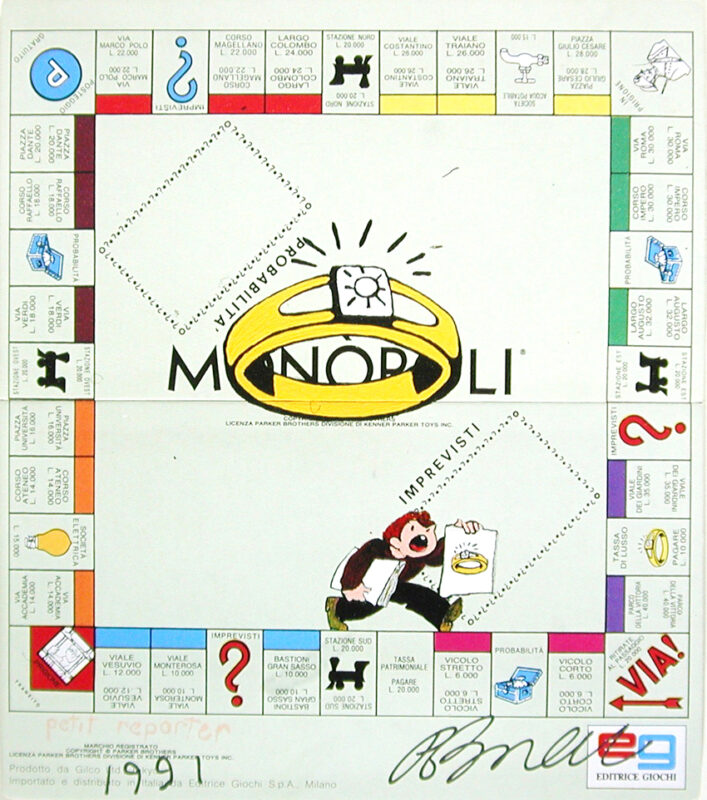 Game boards from Quebec and Canada

SOVIET MONOPOLY
On December 21, 1991, eleven countries of the USSR decided to put an end to the federal state. Five days later, the fall of the USSR became effective. A little earlier, the Association France-URSS published a Soviet version of Monopoly.

AN OBJET OF CURIOSITY
This board, given to me by an Egyptian friend, is the starting point for my work on Monopoly. The use of metallic foil (gold and silver) as well as the images added to the center of the game (the pyramids, the palm tree and the figure seated in the center of the red square) come from the series of works produced before.

A SPECIAL EDITION FOR CANADA
I got my hands on a Canadian edition of Monopoly. St-Jean, Ste-Catherine and St-Jacques streets, painted blue on the plank, were chosen to represent Quebec.

THE EUROPEEN MONOPOLY
A special edition of Monopoly highlights the Birth of the European Union of twelve countries in 1993.

The goal of the game: to get rich at the expense of one’s adversaries. This is what this diptych illustrates. On the right panel, all the properties are mortgaged…